Whoever bears the name Bassemir, is due to this fact alone a celebrity. Since the name is so rare and impressive it stands out from the mass of the ordinary names.

Whom that is not sufficient yet, the following Bassemirs are mentioned, who rose to fame in politics, sports and science:


Clerk of the court

Four generations after the "ancestor" Johannes Bassemir, Johann Georg Bassemir was born in Bechtheim on February 18, 1737. He married the widow Maria Elisabetha Leidner in October 1769 in Neidenfels (Palatinate). Up to his death on May 14, 1816 he was a school teacher and clerk of the court in Neidenfels (today part of the Lambrecht municipality). 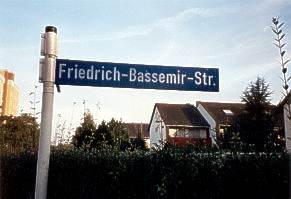 Friedrich Bassemir (May 9, 1892 until September 25, 1969) was local mayor in Oggersheim (which later on top of that became famous as residence of Federal Chancellor Helmut Kohl) and member of the SPD (Social Democratic Party) parliamentary group in the town council of Ludwigshafen. Until 1933 he belonged to the Neustadt District Assembly and was acting mayor in Bad Duerkheim-Hardenburg from 1920 to 1933. The Nazis arrested him in March 1933 and put him in prison. In Oggersheim, today a district of Ludwigshafen, a street is designated after Friedrich Bassemir (see photo above).

Elizabeth Bassemir  works as a Yoga teacher in San Francisco. At the Open Door Yoga School she used to give courses for mothers in pre- and postnatal yoga.

The German record master in soccer is world-famous FC Bayern München (Bavaria Munich). No miracle, since the team build-up is ensured since 1998 by Udo Bassemir. He was coach of the Bayern amateurs, by the way together with the former national topscorer Gerd Müller.

Of course, an Olympic champion is not missing among the Bassemirs. At the Olympic Games of Los Angeles 1984, the German national field hockey team won the silver medal. Thereby goalkeeper Christian Bassemir had kept "the box clean". Today he is managing an orthopedic practise in Bruchsal.

During a memorial service in October 1999 at the New York Firemen's Monument (West 100th Street / Riverside drive) a tribute was paid to the 17 Firefighters of New York City who had died in the past year. Among them also Firefighter Robert C Bassemir , who died on  April 14, 1999. At the service then Texas Governor and later American president George W. Bush participated, too.

Dr. Ursula K. Bassemir researches and teaches at the University of Koblenz-Landau. She is an expert for soil as an ecological system and works on the effects of fertilization on fauna and flora.

The optimization of auto motors is the speciality of motor vehicle master Günter Bassemir from Linkenheim-Hochstetten near Karlsruhe. With changed ignition technology owing to so-called "micro condensers" he improves engine performance and torque around 10 to 20% -  with less fuel consumption and less pollutant output.

Janet G. Bassemir lives as child book authoress, publisher and illustrator in the USA. Her caricatures are printed in American daily papers, such as the Christian Science Monitor, which appears in Boston.

Christina Bassemir, nickname "Babbelgei", lives outside the town of Frankfurt. Unfortunately her multi-media homepage worth seeing is no longer online. In it she exhibited her many interests, like parrots, Heavy Metal music, internet chat, Star Wars, fantasy and much more besides - not to forget the topic Bassemir genealogy.

Bob Bassemir is an ear-specialist in New York. He is member of the nonprofit organization H.E.A.R., which wants to protect rock musicians and rock music fans from the dangers of too loud acoustic irradiation (like tinnitus or hearing loss).

In the idyllic old part of Heidelberg practices Dr. med Karl-Reinhard Bassemir as specialist for internal medicine. After his student days in the town on the Neckar river in the 70's he was junior doctor at the Theresien Hospital in Mannheim, before he established himself in free practice 1986. His medical emphasis is among other things ultrasonic, electrocardiogram, X-raying and laboratory diagnostics. He commits himself in an honorary capacity for 20 years in the German Red Cross.

An exquisite goal for the fastidious palates was the restaurant "Hirsch" (meaning "deer") in Ketsch on the Rhine. The hotel has been owned by the Bassemir family since 1914. Over 30 years it was led by Bernadette van Noordt, a born Bassemir, and her husband Marius. Speciality of the house was the fish buffet, which is gladly eaten particularly at Carnival and Good Friday.

In 1914 Adam Bassemir bought a four-storey mill in Bendigo (to the north of Melbourne / Australia). Together with his partner Armand Friedrich he developed it into a Bakery which was to continue until 1970. Today the complex is listed as "Friedrich & Bassemir Bakery buildings" in the National Trust Register.

During eighteen years she led the Catholic senior's home "Saint Margareta" in Stieldorf, a part of Königswinter town on the Rhine: Rosemarie Bassemir-Möhr. In August, 2003 she was dismissed into well-earned retirement. In the farewell party priest Leo Vetter-Diez attested her a lucky hand - not only in the economic guidance of the 57-beds house, but, above all, in human matters. "Any time she had an open ear for the interests of the residents and employees."

Whether big events, celebrations, conferences or exhibitions - Thomas Bassemir simply organizes everything. From Munich to Berlin, he is a renowned specialist for all services related to events, road shows, exhibition stand and tent construction.

In Germany's largest wine district - Rheinhessen - lies Bechtheim, presumably the cradle of the family name Bassemir. Generations of Bassemirs have produced wine here. The last winegrower in old family tradition was Frank Bassemir. Till recently in his vineyard he produced red and white wines which were also marketed in bottles. The Bechtheim viticulture was also represented by a family member for one year; in 1985, Sabine Pelz, nee Bassemir, was the Wine Queen there.