The Bassemir family has its origin in the Palatinate (Pfalz) in the south-west of Germany. 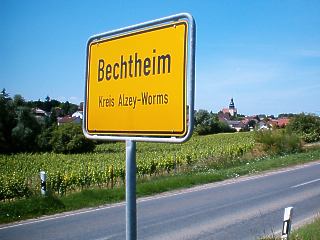 The first Bassemir was documented in Bechtheim (today local part of the Westhofen community, district Alzey-Worms) in the year 1605. His name was Johannes Basimir (so the way of writing at that time). In the "acre book" (land register) he is mentioned as a property owner. He came from the feudal duchy of Brabant and was possibly french speaking. Probably he came as a marriagable man to Bechtheim, because 1615 a (likewise) Johannes Basimir was born there, who left eight children with his death in 1679. The Bassemir family is established up to the today's day in Bechtheim; well-known was the viticulture of Frank Bassemir there.

In very many places of the Palatinate indications of the Bassemirs are found, going back far, for instance in Alsheim, Bad Duerkheim, Hardenburg or Neidenfels.

Even today the origin of the Bassemirs is revealed by their geographical distribution. Out of the today`s approximately 70 persons called Bassemir listed in German telephone directories, more than half live in the Palatinate or around "three-territories-corner" Rhineland-Palatinate / Hessen / Baden-Wuerttemberg.

The meaning of the family name lies in the dark. The Palatinate borders on France and was in history repeatedly under French rule. In addition the assumed ancestor came from Brabant in today's Belgium. Thus one can assume that the name is French. "Basse mer" in French means "ebb-tide, low water". One does not know details.

A nice interpretation of the family name is the following one: the "Great-Bassemir" came from Brabant. He could have been called “Baas” (Flemish: “boss, master”). When called before the clerk of the court, he replied: " Baas - c'est moi " - what the keen writer took down after the sound. Therefore, the name would in fact signify: "The boss am I". Unfortunately, there is not a trace of a proof for this interpretation.

To make it even more difficult, the way of writing in the old documents is very different, from Baßemir, Basimir, Basemir up to Bashame. Today the most common manner of writing is "Bassemir" (70%), followed by "Bassimir" (18%) and "Baßemir" (12%) - see circle diagram. Nevertheless, in all cases the root lies in the Palatinate.

A traditional occupation of the Bassemirs does not exist. The Bassemirs produced famous schoolmasters and physicians, as well as generations of palace garden guards (in the Electoral Palace at Schwetzingen). Concerning religion, Bassemirs were nearly uniformly catholics.

Around the year 1860 at least 14 Bassemirs emigrated to the USA. They form, above all, the origin of the small Bassemir colony living in the USA today.

How many Bassemirs live world-wide? About 70 of them are registered in the German telephone directories, twelve in the USA. Proceeding on the assumption that there surely are also some Bassemirs without telephone or with unlisted numbers, and that on average 2.5 persons live per household, there cound be 250 humans with this surname world-wide.